I’ve been playing Plants VS Zombies for some weeks now. Quite addicted to it. After had consecutively finished the Adventure mode 3 times, I got bored. So I tried the Survival: Endless. After dozens of refresh and setups (yes, I’m such a lame gamer, LOL), I finally made it through 100 flags. Turns out the most important thing in surviving Endless Survival isn’t only the setup alone, but also WHERE and WHEN you deploy the Cob Cannons.

First thing first: building the setup.
*note*
1st row is the very left of your screen, 2nd is the next right to it, and so on.

This is the most crucial step in the whole survival plan. You need Garden Rake purchased from Crazy Dave’s. So make sure it’s available before start playing.

At the first seconds, plant 4 Sunflowers ASAP. Ignore the first zombie, Garden Rake will take care of him. Then the second zombie is coming, rite when you don’t have weapon. Hang in there, keep ignoring him till you have 250 sunlights. Use them to plant Lily Pad and Cattail on 5th row of the pool.

Here’s the trick: plant Sunflower every time you can. So keep the sunlights 50 in stock. When there are more and you can’t plant another Sunflower (as the reload isn’t done), plant respectively another Cattail, Pumpkins and Kernel-Pults. Remember: Keep planting Sunflowers! 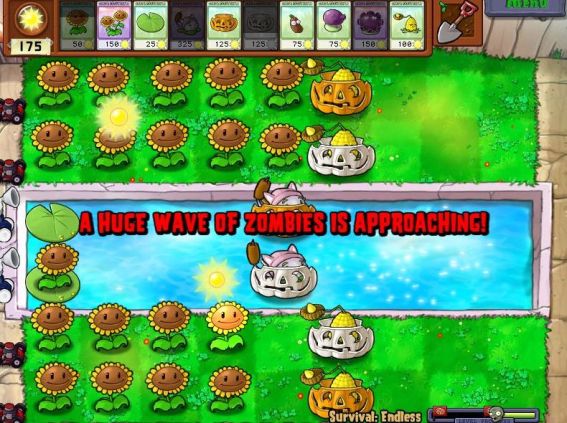 Now you need to plant a row of Twin Sunflower on the pool rite in front of the Cattails. And keep planting Sunflowers on the left rows. 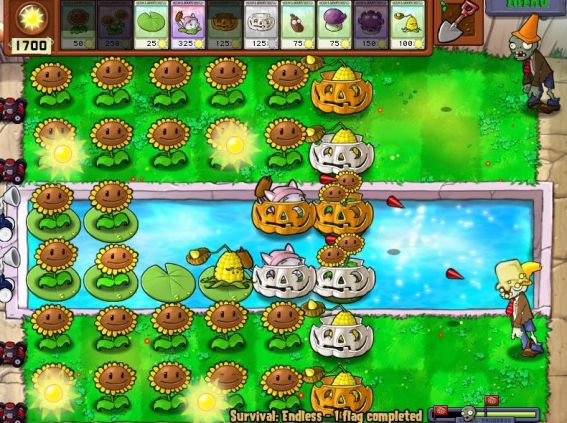 It’s time to plant 3 rows of Gloom-Shroom on the remaining spots of the pool. And keep planting Sunflowers on the left rows. Yes, including the ones on the pool.
Mind you that Gloom-Shroom is expensive, so make sure you plant Lily Pad and Pumpkin before putting the Fume-Shroom inside.

You have a strong front line defense now, so ignore the zombies. Time for heavy weapons! Plant 2 Winter Melons on 1st row, plus 2 more Twin Sunflowers on 4th row.

Since you should now have many Sunlights, plant the Cob Cannons. Start with the ones on the pool.
At this stage you’re gonna be so busy catching the sunlights while planting and upgrading. Mind you that economy is crucial here, so prioritize the sunlight catching.

At this stage you should now meet the Digger Zombie. So plant Gloom-Shrooms on 1st row and Winter Melons on 3rd row.

Oh, have you finished planting Cob Cannons on the pool? Well, keep planting!

Mind you that the Pumpkins hold a strong back line defense. So plant them as well to protect your Gloom-Shrooms and Winter Melons. 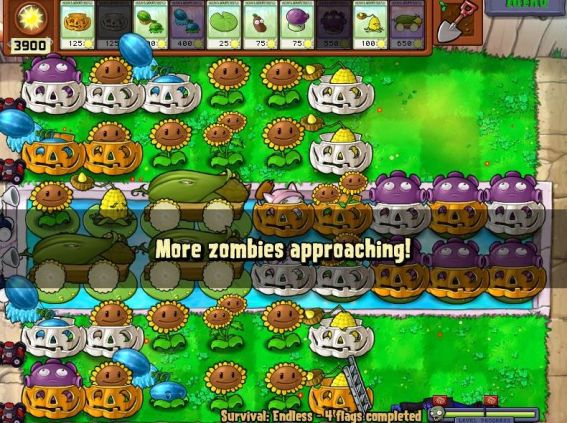 You should now come to a stage where almost all Sunflowers are replaced with heavy weapons. Gargantuars are coming, too. Time to complete the front line defense. Plant Spikerocks ASAP.

Okay, pool is safe. Plant the Umbrella Leaf on 2nd row to keep the back line safe. Now let’s return to the front line. Artilleries time!

Remove the Sunflowers on 5th row and Pumpkins on 6th row to create spaces for the Cob Cannons. By the time Gargantuar is coming your final setup should have been finished.

*note*
Yesterday (when I made it through 100 Flags), the final setup was done at 7 Flags. Today it was done at 8 Flags. I guess it’s because my focus was splitted between playing the game and capturing the screen. So if you’re focused enough, you might complete your final setup even earlier.

Okay, second thing now: Where and when to deploy the Cob Cannons. Basically I have only 4 spots:

With NO Dancing Zombies coming, deploy Cob Cannons on spots as seen on this image:

With Dancing Zombies coming, deploy Cob Cannons on spots as seen on this image:

Mind you that this setup provides you 8 Cob Cannons for both sides (upper and below) of the pool. It means you have 4 strikes before the next reload. After 40 Flags the zombies are sliding in like hell, so 4 strikes won’t do enough. You’ll need Cherry Bomb and other additional weapons.

If you have to repair your crumbling defense, the weapon slots might be filled with required plants. Even so, I strongly suggest you to keep bringing Cherry Bomb, Pumpkin and Squash. They’re cheap and fast reloaded.

More about Plants vs Zombies?